We always know when the Crown Princess is in the ‘Palace’ when Bunny girl puts on her special soft, high pitched, sing-song Princess voice. As soon as Hubby hears the voice he tries to scoot for cover because he knows that means a change of roles for him too because he becomes the Prince then. The Prince has to help Belle pick up her chair, get her toys from the other room, switch on the light in the toilet, help her clean up, do her puzzles…..sigh, yes!….. all the royal duties possible!!

A few days ago I realized I had no role to play in this daily routine. Crown Princess Belle deemed it fitting for me to be Snow White, who has practically nothing to do except watch the little drama. (But who’s complaining? I wouldn’t mind being Snow White every day of the week 24 x 7 if that means I get to sit on the couch and be a spectator.) 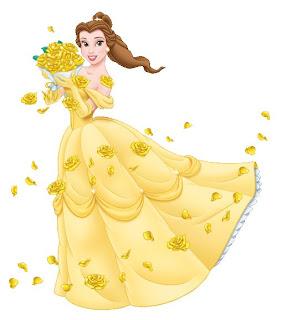 one little aspect-everything she chooses must be yellow. Be it the paper she gets to color on in Sunday School, or the clips she wears in her hair (even if she’s wearing a blue outfit or red.) or even if helping her Dad choose a nice color for a car, last month, at the car dealership. ( I know cringe, cringe!) In an event that the color yellow is not available as an option, we’re all asked to pretend whatever color she chooses is yellow!

It’s terribly cute to watch my Bunny girl transform into this Princess and cuter still to see her jabber ‘Princess talk’ to her loyal subjects (the dolls and her Dad…oops pardon me…the Prince.)

Since we’re minus a camera (clumsy me dropped ours on the floor last week and the only pictures we get out of it now are blacked out ones…sob! We’re still debating on repairing this one or getting a new one.) I had to find an apt picture and found one of Bunny girl that was taken when she had just turned a year old and yes she was wearing yellow in the picture. I guess she just had the ‘Belle’ in her even then!

Check out the Lovin’ Belle post for more on the Belle factor.