My 14-year-old has always loved animals and since young, has always announced with a determination that she will work with animals when she grows up. 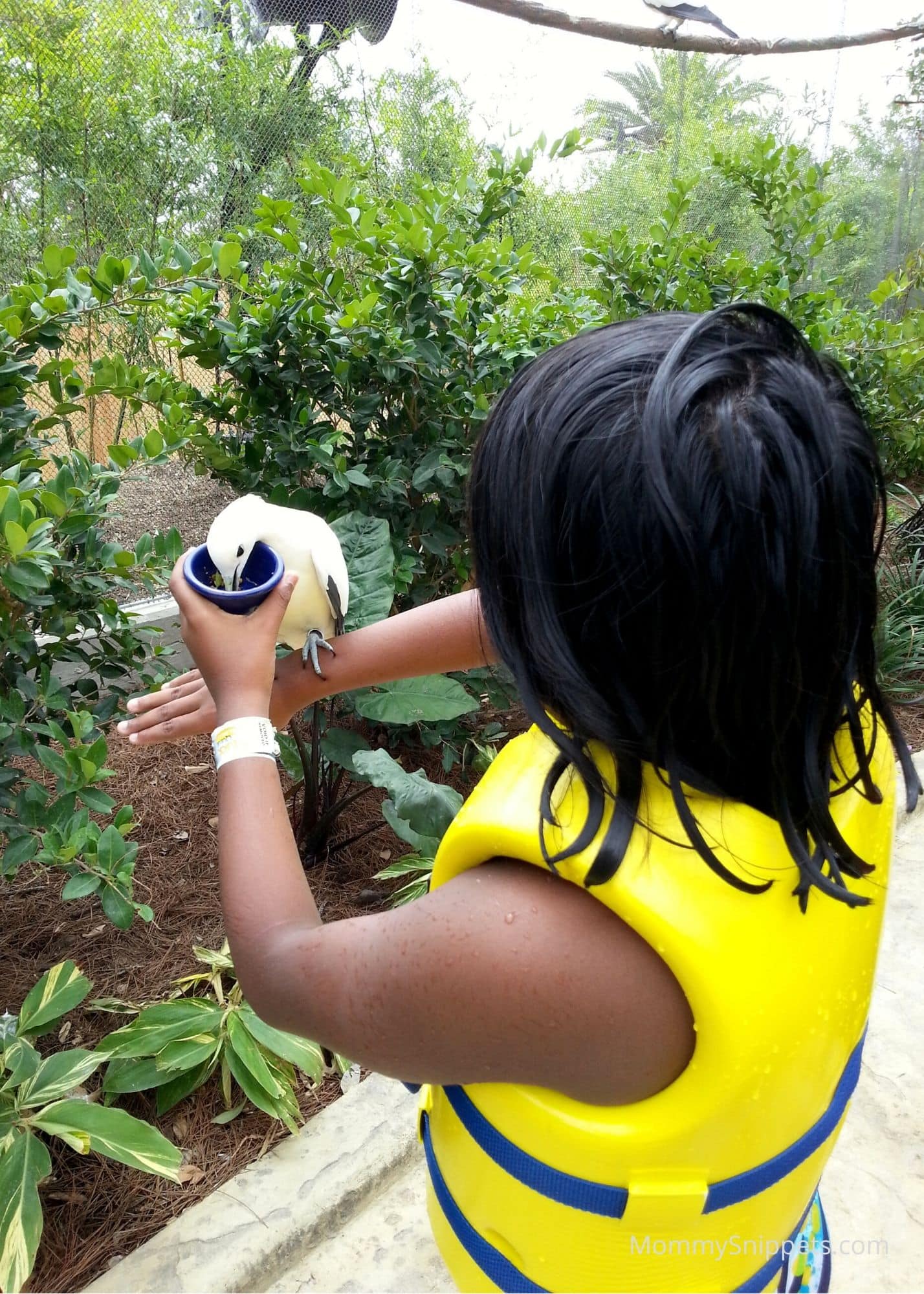 When she turned 7, she asked if she could interact with a beluga whale instead of having a birthday party with friends and getting gifts. And for her 8th birthday, she celebrated with friends, at our local animal shelter. Instead of birthday gifts, her guests brought donations for the shelter and had a private tour of the facility, which ended with playing with a few of the four-legged residents.

She’s not alone in her love for animals. We call Hubs our resident animal whisperer while Little Man and Baby Girl join big sis in being passionate animal advocates. 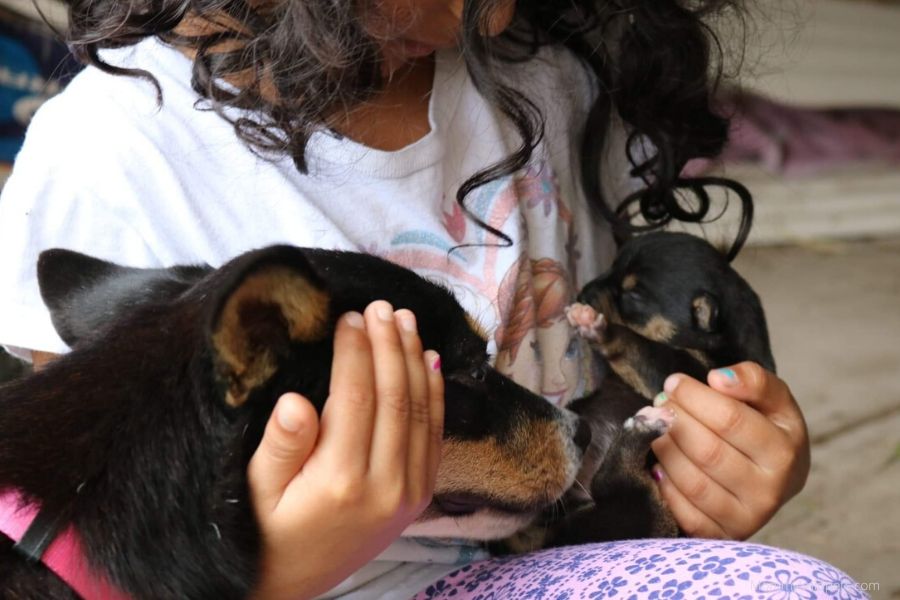 Ever since they first watched the trailer, the kids have been counting down to watching Dolittle (BluRay + DVD + Digital Copy). With all the changes to their routine, thanks to the quarantine in place, I thought it would be fun to make it more than just another movie night. 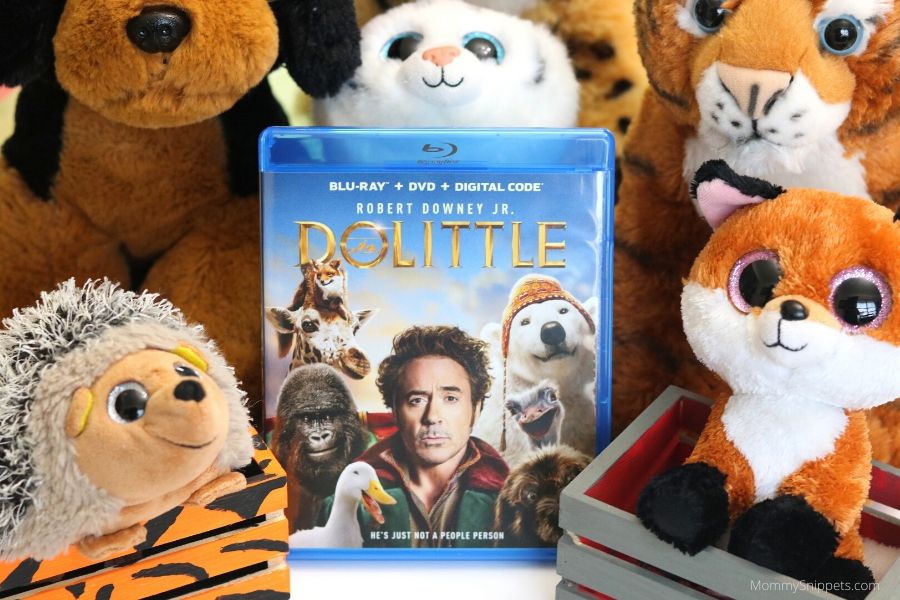 But first, here’s the scoop on the latest Robert Downy Jr. release:

Robert Downey Jr. electrifies one of literature’s most enduring characters in a vivid reimagining of the classic tale of the man who could talk to animals: Dolittle. After losing his wife (Kasia Smutniak) seven years earlier, the eccentric Dr. John Dolittle (Downey), famed doctor and veterinarian of Queen Victoria’s England, hermits himself away behind the high walls of Dolittle Manor with only his menagerie of exotic animals for company. But when the young queen (Jessie Buckley, Wild Rose) falls gravely ill, a reluctant Dolittle is forced to set sail on an epic adventure to a mythical island in search of a cure, regaining his wit and courage as he crosses old adversaries and discovers wondrous creatures.
The doctor is joined on his quest by a young, self-appointed apprentice (Dunkirk’s Harry Collett) and a raucous coterie of animal friends, including an anxious gorilla (Oscar® winner Rami Malek), an enthusiastic but bird-brained duck (Oscar® winner Octavia Spencer), a bickering duo of a cynical ostrich (The Big Sick’s Kumail Nanjiani) and an upbeat polar bear (John Cena, Bumblebee) and a headstrong parrot (Oscar® winner Emma Thompson), who serves as Dolittle’s most trusted advisor and confidante.

Running time: 1 hr 42 minutes (+ Bonus Features that include Behind the Scenes- Becoming the Good Doctor, A Most Unusual House  and more)

This is a movie you can watch with everyone in the family. It’s light, funny, has an easy-to-follow storyline. And Robert Downy Jr. takes the cake! He plays the role of the eccentric animal doctor effortlessly and brings Dr. Dolittle’s character to life beautifully. The animals were my 6 year old’s favorite, especially Mini, the Sugar Glider and Yoshi, the Polar Bear.

Adults will also appreciate the incredible detail that has gone into conceptualising each set. Dolittle’s spacious home is amazing, complete with a well-oiled feeder mechanism for the animals and an operating room with all the old-time bells and whistles.

Overall the Dolittle DVD is a sweet family entertainer that reminds our littles to always be kind to animals and yes, puts a smile on your face. (Something everyone needs, especially now!) It’s a good thing I added this to our grocery essentials list when Hubs when shopping at Walmart, just before the weekend.

It sure does! Popcorn is always welcome but a themed movie night treat buffet is something your kids will love. And when it’s as cute as this one, the kids won’t stop talking about it for a good number of days! 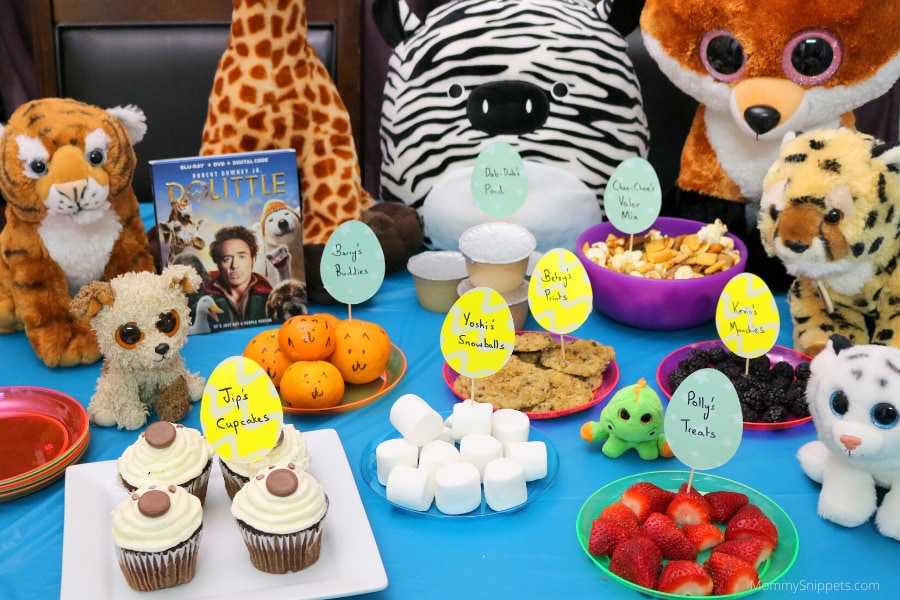 Barry’s Buddies- Tiger Tangerines. (Turn those tangerines into tigers with a Sharpie!) 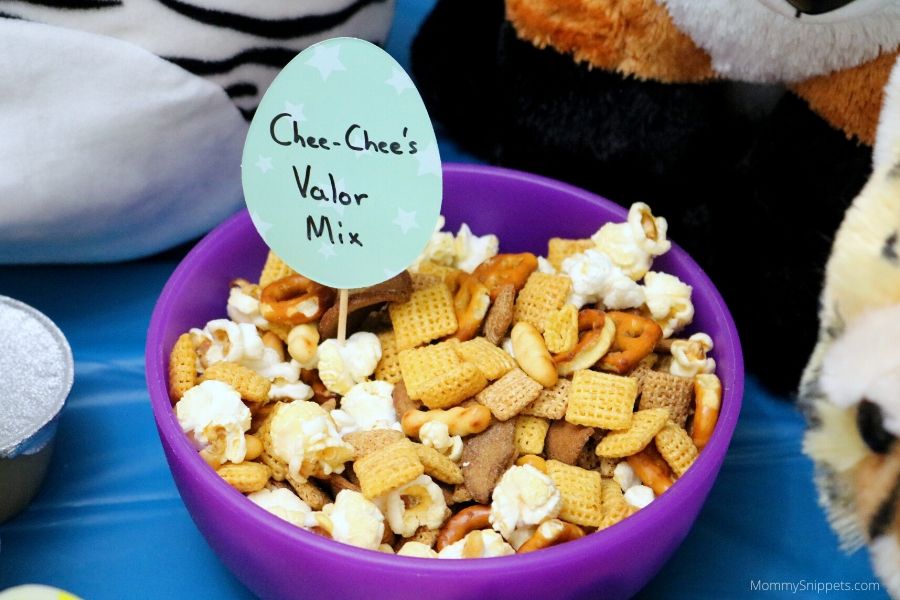 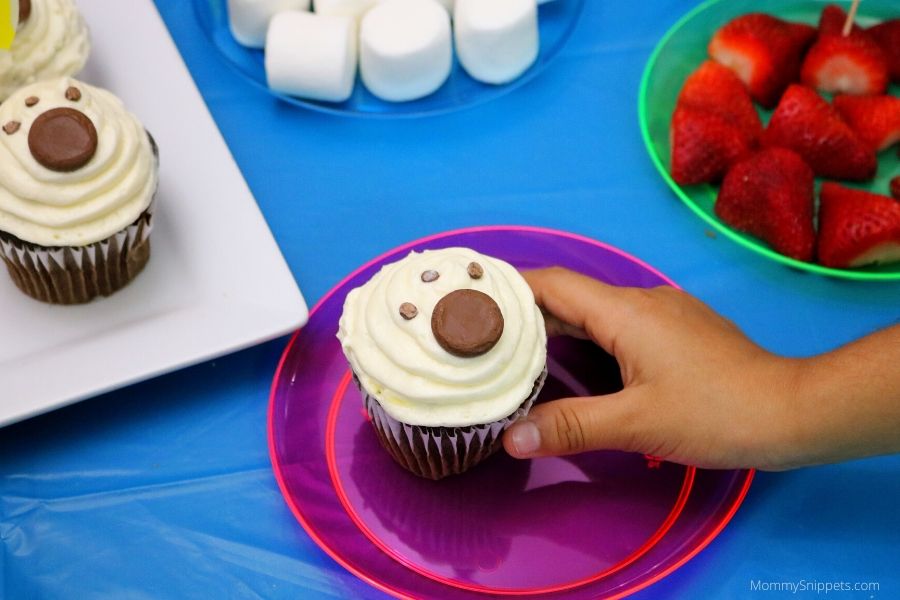 For a beautiful and practical craft, get unfinished wood storage crates (minis) or wooden boxes and have your child paint the box/crate with an acrylic paint color(s) of choice. It can be the same color as their favorite animal or they can get creative with colors.

Once the paint dries, encourage your child to use a permanent black marker to draw paw prints, stripes or animal print that correlates with the animal they picked.

Dottie made a tiger inspired crate, Little Man’s was a wolf and Baby Girl chose dog prints and her favorite colors. 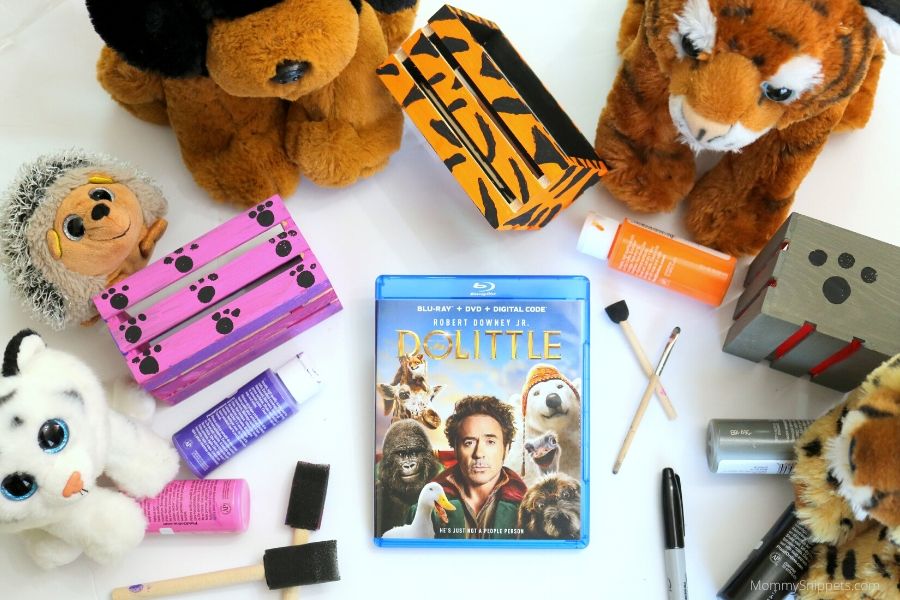 How cute is this Origami Jip?

My 9 year old is crazy about Origami and effortlessly makes all sorts of fun paper creations. This one is easy enough for Baby Girl to do independently too.

Make an origami Jip and create a few more buddies to keep him company! 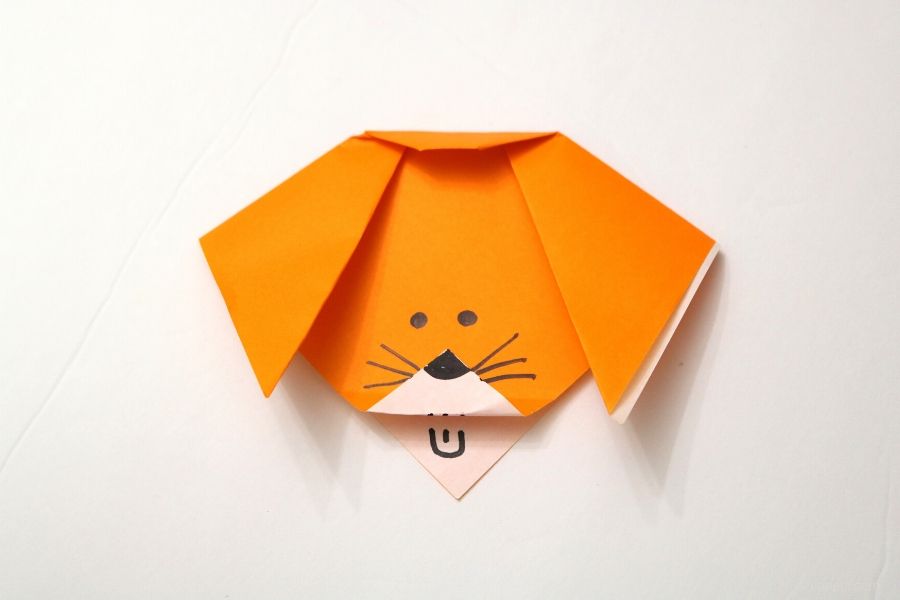 If you don’t fold your paper right to the edges, your pup will have a sleek strip on his ears.

How easy is that?

Here are a few more fun food ideas, crafts and games, for your Dolittle party:

Enjoy a Dolittle I Spy Game by Building Our Story.

Make your own Animal Treat Boxes by A Mom’s Impression.

Whip up Animal Pizzas with The Frosted Petticoat.

Make these cute Animal Face Masks, for when you head out, by Tried and True Blog.

Dolittle is now available for purchase at your local Walmart store or on Walmart.com 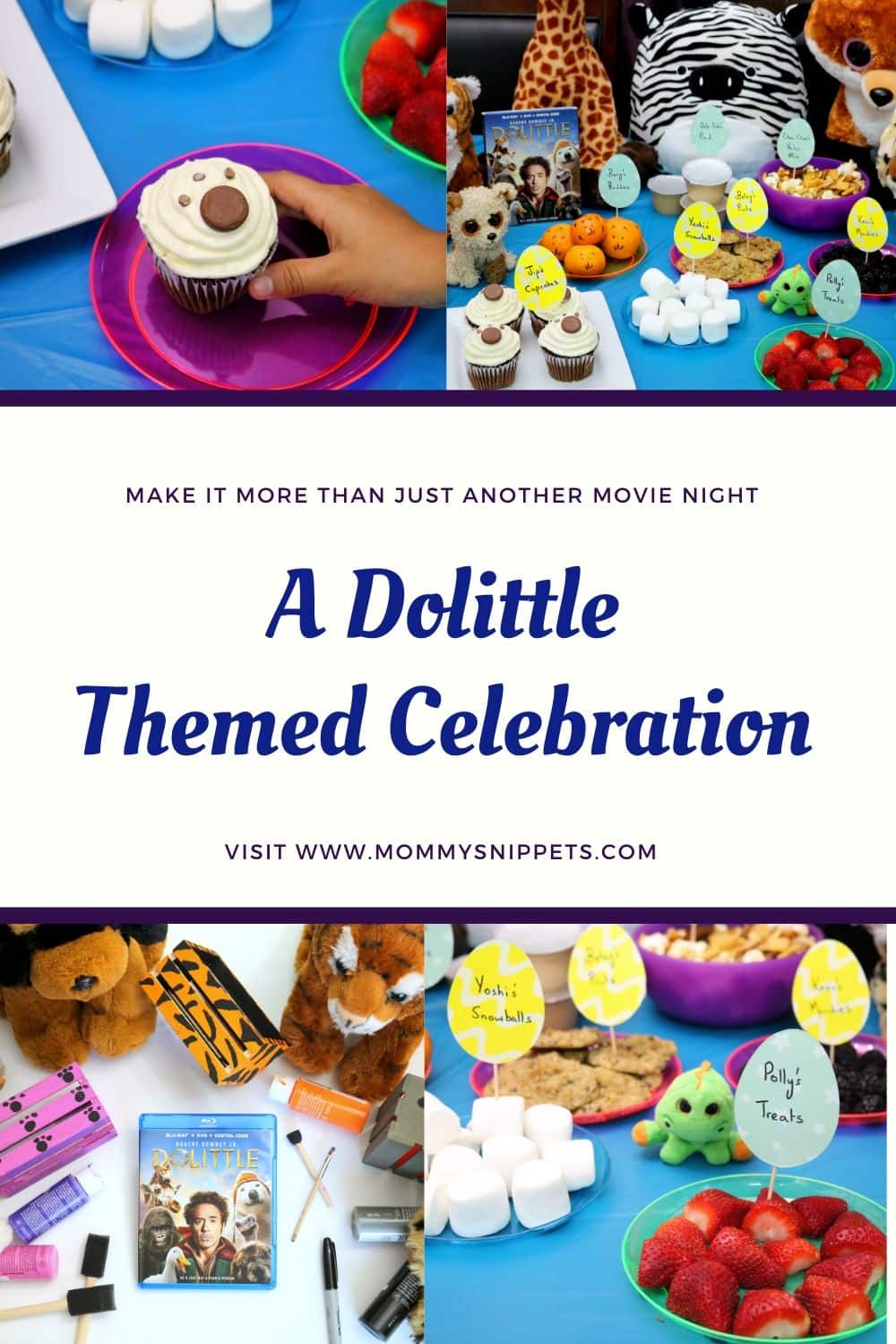 “This post is part of a social shopper marketing insight campaign with Pollinate Media Group® and Universal Pictures Home Entertainment, but all my opinions are my own. #pmedia #DolittleAtWalmart  http://my-disclosur.es/OBsstV”

Previous Post: « How to make a Stained Glass Tissue Paper Cross
Next Post: Choosing the Right Instrument for Your Child to Play »