This post contains editorial samples and/or affiliate links to products I recommend. While this adds no additional cost to you, I will earn a small commission on any sales made.
Tweet
Share
Yum
Pin

I’ve been wanting to do this post for a while now and have been putting it off as as there’s so much to write, so much to share, so much to re-live. Our first trip to Disney as a family was, as Disney puts it,”Truly Magical”!

I suppose what made it all the more special was the way each character made each little child feel as if he or she were the only child at Disney that day and all the attention was his or hers…….. I know Bunny girl came back feeling that way.

Each time I look through the pictures, the one thing that keeps leaping out of each photograph is the giant beaming grin of a very happy little girl and coming to think of it, our grins seemed to look a little large sized too! (Disney does that to parents too!!!)

Among all the characters, Goofy did his part of being truly wacky and absolutely nuts! He was one of the first characters we met and definitely one of the most memorable. What would set Bunny girl off into giggles was the way he’d keep chewing on his ears…and this he’d do ever so often! 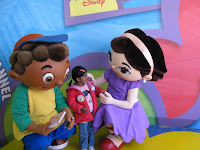 her number one favorite was Annie but that changed on the 2nd of March. As soon as June noticed Bunny girl’s fabric painted June picture on her Tshirt, she gave her a big hug and kept pointing at the picture and giggling. She even made it a point to write a special little birthday message for Bunny girl’s autograph and thereafter Bunny girl was sold!

This picture will always be my all time favorite. I love every bit of it and Belle did make sure she spent a good long time chatting Bunny girl up and did her part to make Bunny girl feel so special. She asked her a lot of questions and listened intently as Bunny girl animatedly replied. Can’t you tell how loved she feels just by looking at her little blissful face?!

At the Animal Kingdom, Bunny girl was called up to help one of the Cast members teach the crowds the Lion King dance. It obviously created an impression upon her little heart as she’s taught the ‘moves’ to her grandfather and all her little toys! It’s actually very infectious with the bop bops and slide slides!! (I guess she got me too!) Oh and they even made sure they gave her a little Certificate of Commendation at the end that states she officially hand jived for the Lion King Musical- so cute!

Another princess who officially struck a chord with Bunny girl was Cinderella. The Cinderella book comes out for a read more often than it did prior to our trip and now when Bunny girl plays with her Cinderella doll ( which just for the record, was never played with till just before our trip to Disney. She got the doll for her 2nd birthday!) I hear her saying “You are Cinderella Cinderelly and I am Mama Cinderelly”. (Cinderelly was the name the two little mice gave Cinderella and lovingly called her this way…..just a clarification- wink wink!)

And finally our mouse-eared pair Mickey and Minnie. They were absolutely adorable and each time Bunny girl met them it was special. Since Bunny girl’s still too young to understand the concept that different people dress up as characters, she assumed they made sure they were at each park when she got there. Finally on the last day she even asked ” How did they follow me here too?” and we just told her they just knew she would be there and they wanted to make sure they were around to make her day special. This always pleased her as she’d continue walking around the park with a beautiful proud smile! I think the icing on the cake for her was the moment a Disney Photopass photographer got an entire room of visitors to sing Happy Birthday for her and Mickey and Minnie were there too. Minnie did her little twirls and danced around Bunny girl while Mickey conducted the group and Bunny girl….well….she was in 7th heaven!

There were many special moments that could be re-lived all over again but for now this has to do as I need to get my pep up cup of ‘chai’ (lovely Indian tea, cardamom flavored)before my Energizer Bunny stirs from her nap! Toodles!!

Marina is a grateful, South Texas-based mom of two daughters and a son (a 15-year-old, 10-year-old and 7-year-old). Her husband, of 18 years, is her best friend and biggest cheerleader. The family loves soccer, their sweet rescue pup Jingle, good food and traveling!