Two weeks ago we celebrated Bunny girl’s 3rd birthday with a Disney Theme. What made this party special was Bunny girl helped every step of the way, from filling the goody bags, to helping create the game props, to making the Mickey ears for the party hats. We had the party indoors as we had crazy cold climate which was very unusual for our city…but that didn’t stop us from having fun.Here are some of the ideas we brought to life at our very own Disney party:

1. We made customized party invites– We bought regular invitation cards from Michaels and Bunny girl stuck the little Minnie/Mickey stickers on the front. (depending on who was getting the invite.) 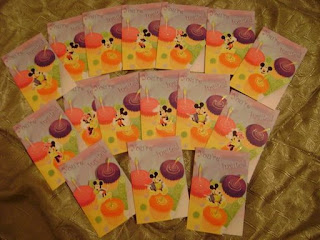 The initial plan was to have the party at the park (The park had a duck pond…Donald Duck!)but sadly the weather took a change for the brrrs and we had to change it to our apartment 2 days prior. (Made up a little poem to tie in the Disney theme.)We pasted the poem on the back of each invite.

2. Thought up some Disney themed games –

3. Made our own Mickey party hats– Elisa had good fun helping make these…it was super easy and we just needed black chart paper for the ears. We cut these out and attached them to the party hats through tiny slits on either sides of the hats.

5. Disney themed goodies- The little ones had Tinkerbell favorbags filled with a little plastic glass that held their Princess or Pooh pens and pencils, a Mickey or Minnie topper sharpener, a Mickey or Minnie replaceable eraser pen and healthy snacks- raisins, Welch’s fruit snacks and crackers.

It wasn’t much but it was Disney enough for the kids. Best of all, it was fun doing the preps before the big day too and Bunny girl was the best little helper any Mommy could have!

P.S. Here are the 8 Little Einstein Mission Clues…try n guess them all (scroll down for the answers):

1. I BOUNCE AND JUMP AND I’M LOTS OF FUN…I’M ORANGE N BLACK AND POOH’S MY BEST CHUM

4. UNO DOS TRES…WE’RE ALWAYS THERE TO FIX- MY TOOLS N I DO SOME GREAT FIX IT TRICKS

5. I LIVE IN A PALACE, THAT’S A S ROYAL AS CAN BE…I’M A PRINCESS WHO LOVES TO SING AND YES I’M PRETTY

6. PIXIE DUST AND SPRINKLES, I LOVE TO FLY…PETER PAN AND I SOAR ACROSS THE SKY!

7. I’M NOT LIKE OTHER GIRLS COZ I HAVEA LONG FISH TAIL…I LIVE UNDER THE SEA, BELOW WHERE THE BOATS SAIL

8. MISSION COMPLETE! YOU DID JUST GREAT. FIND ME AND MY BATON, THEN YOUR RACE IS COMPLETE!
.
.

July 9 2009 update: Our Disney party idea was featured on Creative Parties and Showers.